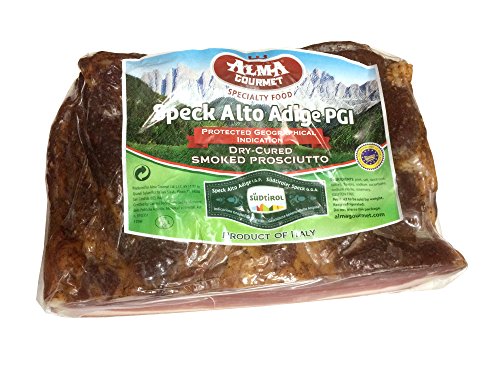 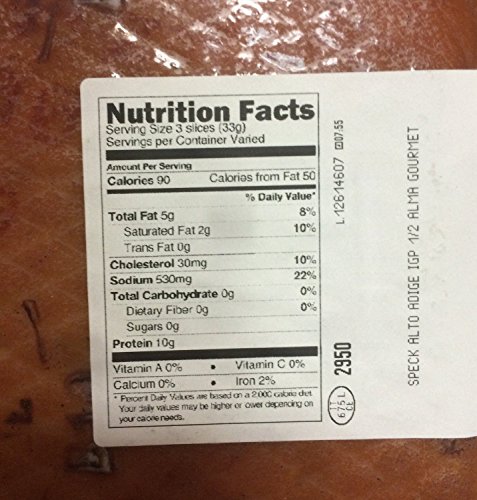 Alma Gourmet Speck Alto Adige IGP – Cured, Smoked Prosciutto Dry-cured and lightly smoked from Italy’s Alto Adige. Its garnet color, smoky aroma and mountain flavor are unmistakable. Italian Speck, or dry-cured smoked ham, can be traced back to the 13th century; however, the name itself didn’t enter the common use until the five centuries later. Originally produced by farmers isolated in the mountains of Alto Adige, Speck’s popularity and production has spread to other regions of Italy. Speck is made from a pig’s rear thigh, which is deboned, and smothered in a dry-cure of salt and various spices, which often include pepper, garlic, juniper, pimento, and sugar. After about two weeks of curing, the meat is gently smoked over wood for another two to three weeks. Finally, it is left to dry for 20 to 24 weeks, further developing its smoky flavor. In Alto Adige, speck is cut into thick slices and served with dark, hearty bread. Do not trust any other vendor who sells lower quality products! This is Alma Gourmet Top Quality Speck Alto Adige IGP.

Speck is made from a pig’s rear thigh, which is deboned, and smothered in a dry-cure of salt and various spices, which include pepper, garlic, juniper, pimento, and sugar
High Standards of Quality Control – We Ship with Ice Packs – Ships from New York
5 pound (2.3 kilogram) – WEIGHT APPROXIMATES -Product of Italy